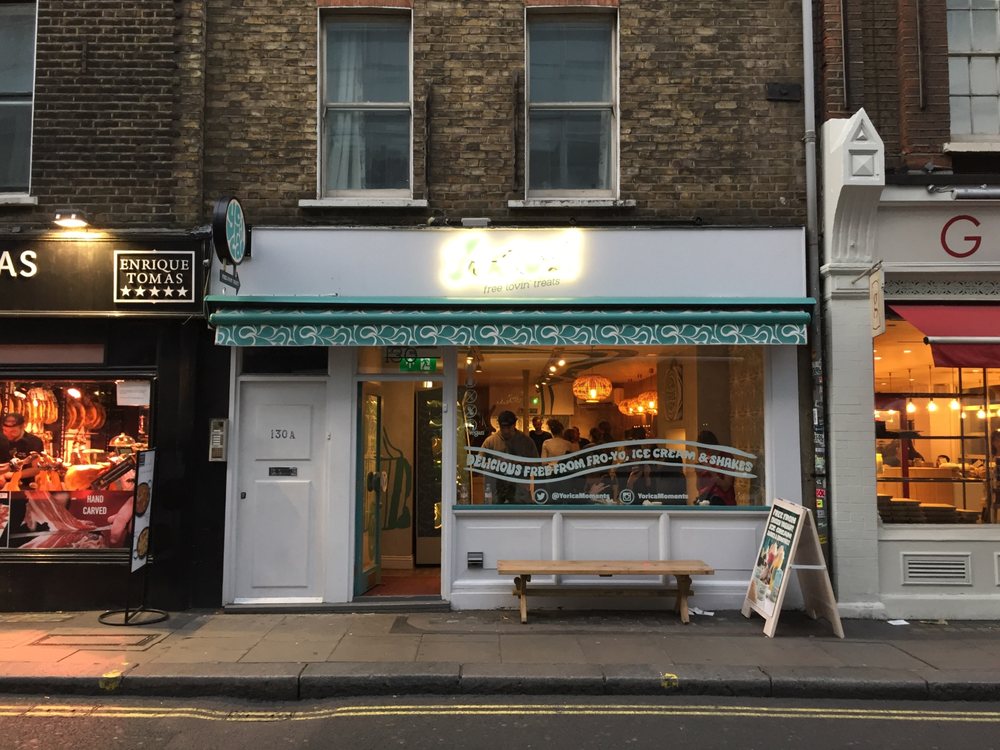 It’s way past the time that I should have written my review of Yorica, London’s only fully vegan ice-cream parlour.

It’s been about three months since I visited the first time, and about six weeks since I went the second time. I put off writing this because, well, you’ll see.

I remember being soooo excited to hear there was an ALL.VEGAN.ICE.CREAM place in London.

This stuff normally happens in New York or Austin – not London!

And it’s on Wardour St, one of my favourite streets ever!!

It opened in March, but I didn’t have occasion to visit until July of this year.

I was with my (non-vegan) mum. The idea was we’d have a mini ice-cream crawl. First, a gelateria in Covent Garden, which has several vegan options, then on to Yorica.

When you enter Yorica as a vegan it seems magical. It has a sixties psychedelic theme going on decor-wise, and is…just…so…pretty! It has fun slogans and signs everywhere like this: 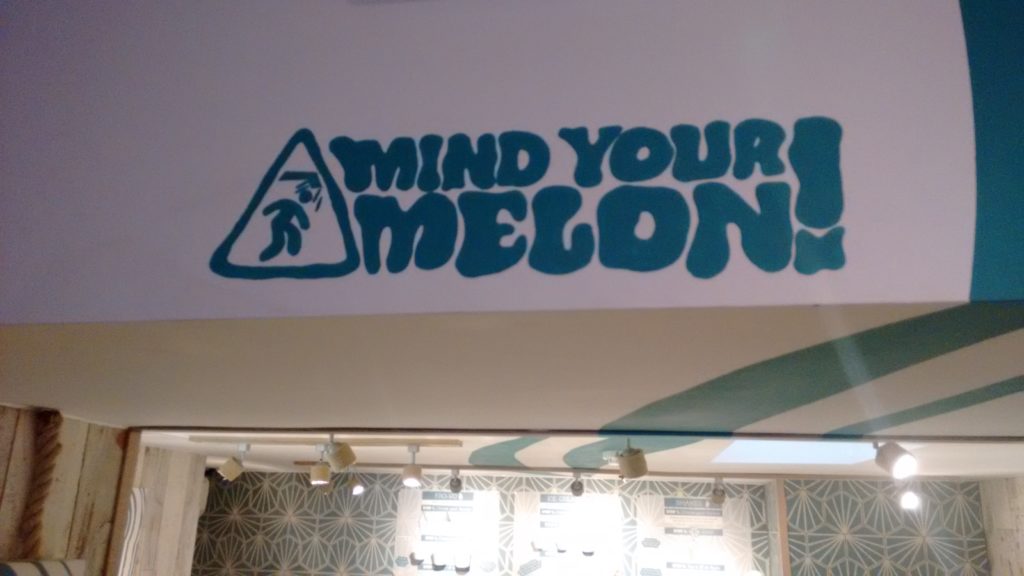 Yorica actually offer froyo as well as ice-cream, so if you want a lighter dessert, you’re covered!

They have four flavours of froyo – caramel, matcha, chocolate and vanilla, and there are around thirteen flavours of ice-cream, including chocolate, strawberry, vanilla, bubblegum, cookies and cream, and beetroot (which, while inventive, didn’t really sound appealing, at least to me!)

There are also sprinkle machines in the main space, so you can cover your ice cream in however much crap you want!

I try and limit sugar now for health reasons, but I know that if I’d visited as a kid, I’d have thought this place was heaven on earth.

This visit, I opted for the matcha froyo. Partly because it’s one of my favourite flavours, but partly because I wanted it ‘soft serve’ (‘Mr Whippy style’ to us Brits!) Only the froyo is soft serve, the ice-cream is scooped.

I chose pomegranate seeds as a topping because I couldn’t resist seeing the bright red against the pale green of the matcha froyo, I knew it’d be pretty – and it was: 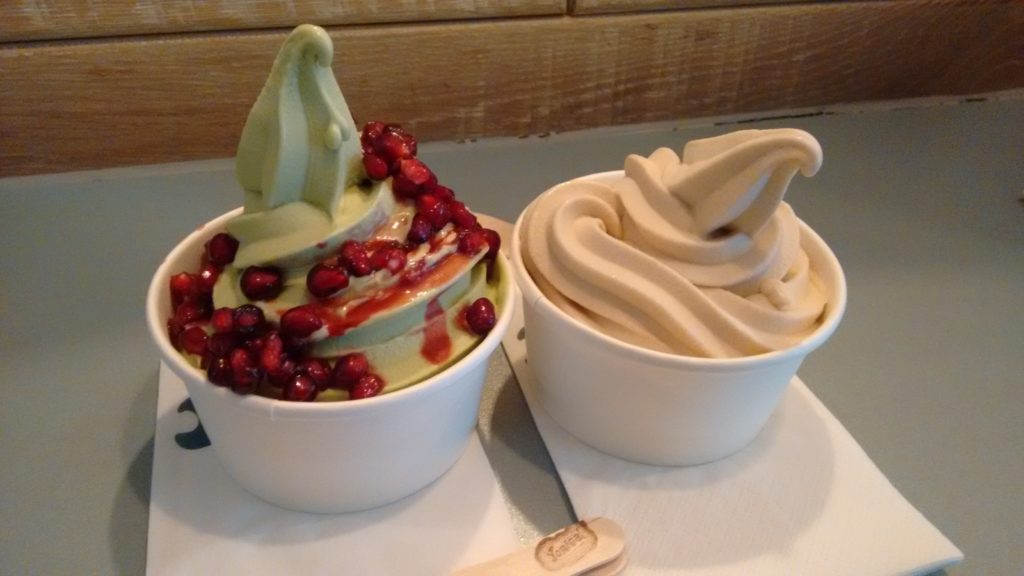 My mum opted for caramel flavour with, er, nothing on top. I KNOW! Boring! 🙂

Look. I can only be honest.

Much as I hate to say anything less than congenial about the first vegan ice-cream joint in London; I ain’t gonna lie either. There’s no reason why we should hold a vegan place to a lower standard than a non-vegan place. That wouldn’t make sense. And perhaps you’ll have a different experience to me in any case.

Firstly, the pomegranate seeds were not fresh; they were pretty dry and hard. I was worried I’d lose a filling so I spat them into a tissue.

This alone was not a problem to me. So it was a bad day for the pomegranate seeds, so what? I still had all that luscious froyo right?

You know, the matcha froyo didn’t taste bad; it just wasn’t great, and didn’t particularly taste like matcha. It was pleasant enough for a few mouthfuls. Then, something happened which just does.not.happen.to.me.ever. I found I was having trouble finishing it up!!!! It was just a medium pot; not super big, and bear in mind I can eat a whole pint of Luna & Larry’s Coconut Bliss, no problem!

I really wasn’t enjoying it as much as I’d hoped to.

The caramel froyo my mum had was a little bit better, but not much.

I think part of the problem was the lack of creaminess, and I figured that froyo wouldn’t be as creamy as ice-cream, what with it not being, um, cream, right?

So I thought it was only fair to give Yorica another try before I wrote a review, and I’d be sure to get some actual ice-cream next time.

SO, a month or so later, the next time occurred, and I found myself at Yorica again, on this occasion with a friend.

I had a big scoop of strawberry ice-cream, then inquired about a flavour that I wasn’t sure about. I was told it was called ‘wowbutter’ which is like peanut butter, but not peanut butter. Uh, ok! Nothing else was really tempting me so I got a big ol’ scoop of that too.

A drizzle of strawberry syrup to top it off, and then I couldn’t wait to get stuck in! 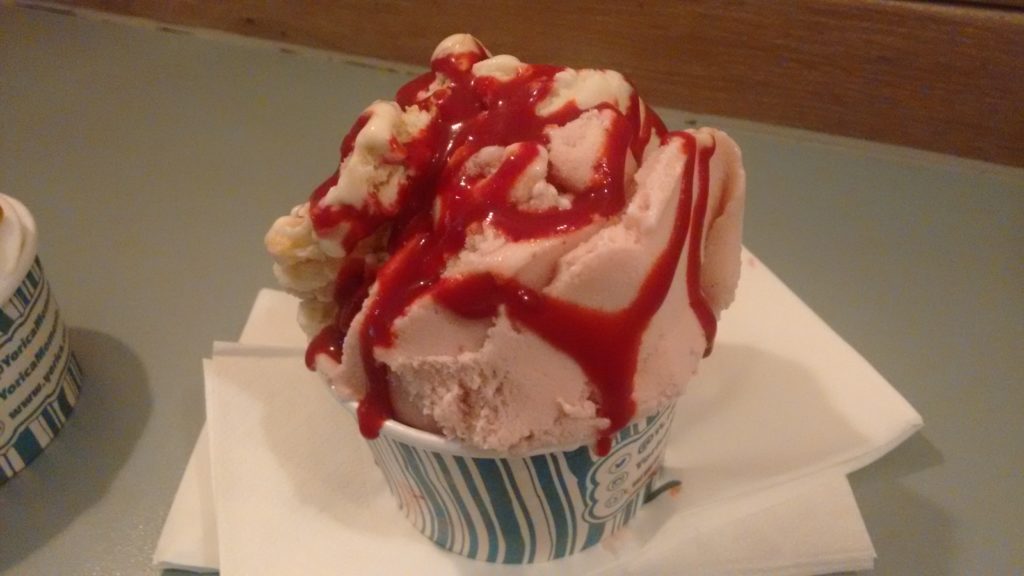 I really wanted it to be great, but….it just wasn’t. I had trouble finishing this too. Both flavours just tasted like….cheap ice-cream.

I KNOW how great vegan ice-cream can be. There’s an all-vegan place in Austin, Texas which had me going back for 3 more helpings.

And I already mentioned how much Luna & Larry’s coconut Bliss I can devour.

So Delicious, too, are champs at plant-based ice-cream.

So what was the problem here?

I can’t work it out exactly.

I asked what the ice-cream was made with, and was told rice milk. I feel rice milk may be too thin to make a decent ice-cream, perhaps this is the problem? I’m not sure though as it was also a taste problem, not just texture.

The place is pretty; the service is friendly; and it’s fun looking at all the things you can top your dessert with.

I may come back with my friends’ kids – I know they’d adore topping their ice-cream with ten tons of candy!

And if I was out with several friends just looking for something fun and light to do, I may bring them here.

BUT…if I’m out on the town looking for a truly yummy iced dessert with my partner or a friend, I’ll probably go to one of the gelaterias that have vegan options. La Gelatiera on New Row for example (which has a good number of options), or Snowflake, a few doors down from Yorica on Wardour St that has one or two vegan options.