Does it seem like it’s Christmas every frickin’ six weeks or is that just me?

It’s just such a lot of….well…bother!

Am I the Grinch?

If this is your first (or one of your first) vegan Christmases; you may have a few concerns about how time spent with family and friends is going to pan out in light of your food choices.

It’s true that Christmas CAN sometimes present new vegans with a particular set of dilemmas.

I hope I’ve covered most of them here:

How do you navigate non-vegan family dinners?

I wrote a pretty comprehensive piece on this last year. Hope it helps!

As a vegan, should you even ATTEND non-vegan family dinners?

This is totally your call.

You are no less vegan if you do.

I get that it might be upsetting for some people, but it can also be an opportunity to wow the fam with some gorge food you made to bring and share.

A big obstacle to people going vegan is that they think the food will be boring and bland, so this can be an opportunity to prove to skeptical animal-munchers that the opposite is true.

If YOU are hosting Christmas, should you offer non-vegan food options?

In my opinion? Hell no. Your house = your prerogative. Why would you compromise your values?

However, you MUST offer lots of amazing plant-based food, to stop anyone whining about the fact that there’s no meat.

Look – you’re hosting – so you’re gonna be committed to a certain amount of kitchen time in any case. Try and find some extra-spesh, beautiful looking dishes that will excite the eyes and taste buds of even the grizzliest meat-eater.

Good food is good food. If it tastes great – they’ve got nothing to complain about!

I found some pretty cool ideas here and here.

What do you do if someone buys you a non-vegan gift?

Hmmmm. I have to say I think I would just be gracious about this.

It’s a gift. Their intention was good.

If you say you don’t want the gift and try to explain why...I mean…I just can’t see that turning out well.

If the gift is a leather or wool product, you can always make sure that you communicate effectively during the following year that your veganism includes not wearing animal products so that people get the message and it doesn’t happen again.

As for the gift? If it’s a leather, suede or wool product, I’d probably give it to a charity shop. It’s already been bought – and it can’t just dissolve or evaporate – so it may as well not go to waste.

If it’s a non-vegan food gift?

This one is difficult. Personally I couldn’t give it to some else – because I know how harmful animal products are health-wise and I couldn’t give to anyone else what I wouldn’t eat myself.

On the odd occasion when someone has unwittingly bought me non-vegan chocolate, it’s actually just stayed in my cupboard until its gone bad, such is my cluelessness about what to do in this situation.

How do you make vegan mince-pies

BLEEEEEEEEECCHHHH! I can help you go vegan and blow your mind with a ton of insights and inspiration to help you STAY vegan, but I cannot tell you how to make a vegan mince pie.

I always HATED those things and found them disGUSting. What even IS that mince shizzle made from?

I do not have the mince pie gene.

I found this recipe, if it helps, but I have not tried it and have no intention of doing so, so I can’t tell you if it’s good. Looks pretty legit though, if you like that sort of thing…

Is it ok to buy friends and family vegan cookbooks?

I say yes – if it’s a great quality cookbook. If it has lots of mouthwatering pics and engaging recipes, why not? Like I said in a previous point – good food is good food, and a good cookbook is a good cookbook, vegan or no.

What do you leave for Santa by the chimney/back door?

Um, a glass of almond or soy milk and some vegan cookies? We don’t want Santa to eat saturated fat and cholesterol and die of a heart attack or diabetes-related complications do we boys and girls?

And not meaning to fat-shame Santa, but he’s portly enough already if truth be told 🙂

I wish you all a relaxing and joyful holiday period, whatever you’re doing. And don’t forget, any rubbish presents – regift or repurpose 🙂

Winter ain’t good for much in my book.

If I never see another winter it’ll be too soon.

I mean…um…not that I want to die before next winter; but whhhhhhhhhyyyy can’t it go SPRING! SUMMER! AUTUMN! REPEAT!!!

But…I guess I love skating on the Christmas rinks. And the new Starbucks mulled apple chai with REAL cinnamon sticks is kinda delicious.

And I loooove hot, warming soups and bean stews and curries.

It’s perhaps worth suffering just a little winter for these?

Now we’re all down with the parsnips, carrots and turnips; but there are two others you may not be so familiar with that would love to be players in your winter meal rotation.

Uh, it’s fair to say these two characters ain’t pretty; but their charm is in their rich, earthy taste.

If you haven’t tried them already, get some in and see what you think.

It isn’t always the prettiest veg that taste the nicest!

And they’re cheap as chips, hurrah!

The first is celeriac. This is its prettiest side: 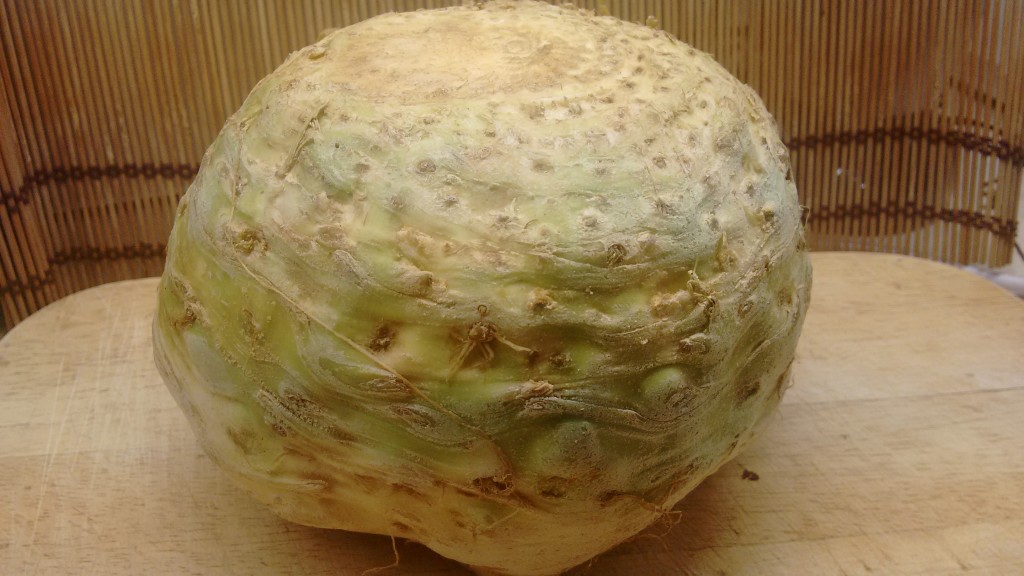 And this is its slightly grizzlier side! 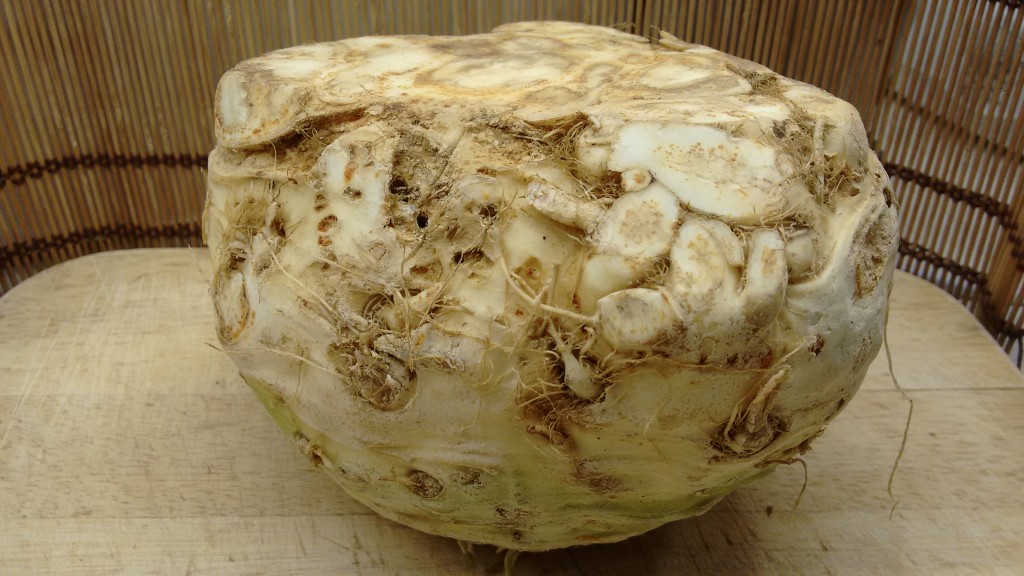 Not to put you off, but it looks a little brain-like to me!

But seriously; please don’t be put off by the nobbles or the hairy bits 🙂

The second glorious but lesser known winter root veg is rutabaga; or swede as its known here in the UK.

This is a little more photogenic – I love the green with the purple.

Celeriac is a great source of Vitamin B6, magnesium, potassium, manganese and vitamin C; while the rutabagas will provide you with vitamin C, vitamin B6, potassium, calcium and magnesium.

One of the best and simplest things you can do with these two veg is make fries. YAY, friiiiiiiiies!!

These are the fries of the celeriac: 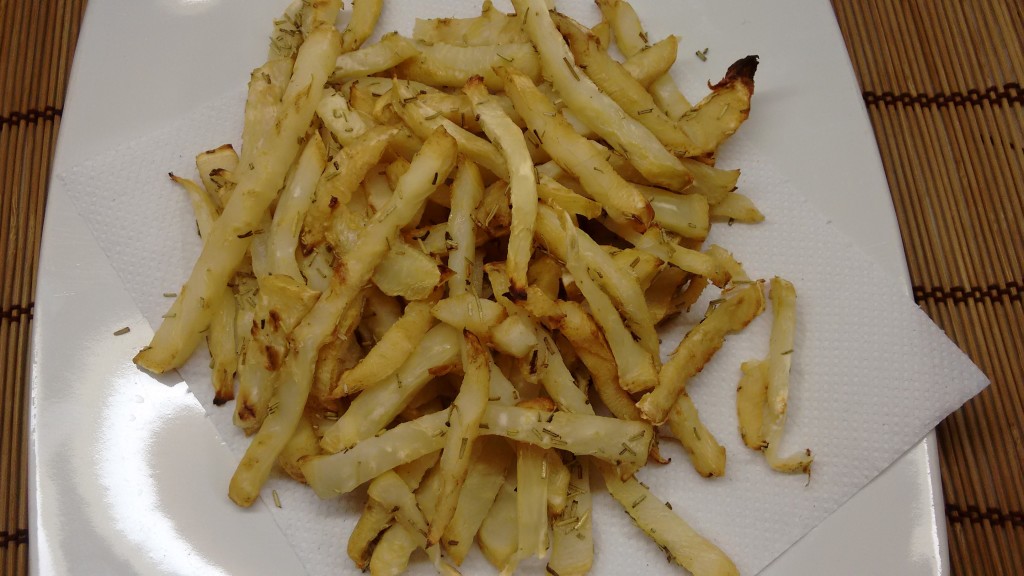 And these are the fries of the rutabaga:

Have a change from potato or sweet potato mash – try mashed celeriac or rutabaga!

You can even do half potato, half rutabaga; or half potato, half celeriac. The other day I mashed a mix of the root veg I had left in my fridge – which happened to be sweet potato, a wedge of celeriac and a couple of turnips. I was doubtful that it could work but it was absolutely delicious!

Make the mash exactly as you would regular potato mash. i.e. boil the veg till soft; drain; mash your veg while adding a splash of soy or almond milk and a knob of dairy-free margarine. Season well with salt and black pepper.

Celeriac and rutabaga are great in stews and soups. Try sometimes adding either (or both!) to any recipe instead of potato.

Don’t get in rut with your roots! Shake it up! Don’t worry about the ugly! Isn’t there a saying.. ‘ugly on the table, damn tasty in the mouth?’ No? Well there OUGHT to be.

So, if you’re in this hemisphere, you’ll know it’s winter. And if you have to travel by public transport every day like I do, you’ll have had the pleasure of dodging the sneezes and splutters of fellow travellers for a few months now. Maybe you’ve been the offender? Hell, it’s the best way to get a seat right?

On a train the other day, someone actually sneezed ON MY HEAD. I was sitting down, and as there were no seats left a girl was standing over me, holding on to my seat and reading her phone. I heard her sneeze build-up and didn’t sweat it too much as I assumed she would turn her head and the, um, sneeze rain (?) would land well away from me.

Instead she stayed where she was and put her hand over her nose. This would have been fine except the sneeze escaped from under her hand and landed on my head. Yes. The sneeze rain settled, droplet by droplet, On. My. Head.

Have you ever been laying on your back in yoga in the relaxation position, been caught off guard by a sneeze, and then felt the fine mist slowly land on your face? Me neither (Just kidding!) This felt similar, but on my scalp. I may wear a rain hat for the rest of the winter.

Needless to say, I didn’t know what to do with this. I sat with it for a while, and then decided to erase it from history. Then I got off the train at Streatham Hill.

What am I leading to? Well, I’m pretty sure you’ve had similar experiences at some point this season, and in order to avoid catching the lurgy it’s a good idea to give our immune systems a little help at this time of year.

Some swear by chicken soup, but as this is a meat-free zone, my plant-based tips for keeping away the snot-goblins are as follows:

These next two are based on empirical evidence solely. I know they work for me, and that they will not harm you should you decide to try them (as indicated) too.

May the rest of your winter be cold free!