At the end of May we were in New York.

One day while walking in the West  Village, I spotted a place called Amorino, and recognised the name. A friend of mine in Bordeaux had raved about a place with exactly the same name, that supposedly made the most amazing vegan gelato and sorbets.

As I got nearer to this Amorino, I realised that it, too, was an ice-cream joint, and the penny dropped that Amorino was probably an international chain of ice-cream joints.

After a quick flurry of messaging back and forth with my French friend (who confirmed that this New York Amorino was indeed a branch of the shop that she had visited in Bordeaux), a little further research taught me there were actually lots of branches in London. DOH! It always seems I learn about the vegan options in my own city in totally backwards-azz ways!

We decided to come back and try Amorino properly the next day. Which turned out maybe not quite the right day to do it – Memorial Day. As you can imagine, it was packed to the rafters. This was our stupid oversight though, so I wasn’t gonna judge the whole experience on that.

While Amorino isn’t 100% vegan, there are around, I’m gonna say, 10 vegan flavours – which is pretty impressive. Usually in these kinds of places there might be a sad-looking lemon sorbet as the sole vegan option. So to have this much choice in a commercial gelato house is fantastic.

The vegan flavours are all clearly labelled ‘vegan,’ and they are all placed together, so there is no chance of making a mistake, and I’d imagine there is negligible chance of cross-contamination with the non-vegan gelato.

I’ve had conflicting info on whether the cones are vegan or not. Our most recent Amorino server said they were, but I just read somewhere online that they’re not. But no matter – just get a cup, you’re not 7. Unless you are.

The queuing system (it’s the same system in every branch I’ve since learned) is a little bizarre. You queue at the till and pay for your gelato size (it comes in several different size cups or cones), and you are given a receipt. You then move down to the gelato counters, give your receipt to the dude behind the counter, who takes the appropriate size cup/cone and you tell them what flavours you’d like.

Now that sounds practical enough, but in reality, it would be better if you could see the gelato first and make up your mind what you wanted, then pay, and then grab the goods. The way it’s set up now, you pay, then (if you’re like most people) you stand there for ages holding up the queue while selecting from the abundance in front of you.

Maybe if you could see all the flavours first, so you’d already decided in advance? I don’t know, it just feels there could be a better and quicker way.

I learned on my last visit that the vegan flavours are actually sorbets, and not gelato – and all the gelato are non-vegan. Which COULD be disappointing. But it’s not.

The saving grace, and the reason why I will keep revisiting Amorino, is (SPOILER ALERT!!!) for the pistachio, hazelnut and chocolate flavours. Even though they are technically sorbet, they taste as creamy as ice-cream and are all absolutely OR-GAS-MIC. Mighty flavourful and not too sweet, the sweetness is masterfully apportioned to enhance the flavour, and doesn’t at all overwhelm it, as can be the case with inferior ice-cream.

The other flavours can change, but they seem to always have chocolate, strawberry, raspberry, mango, lime & basil, passion fruit, banana, and coconut.

On this first visit in NY, on the advice of my friend I tried a cup of the pistachio, and paired it with almond (you can have as many flavours as you like but it’s probably best not to go for more than three to avoid overkill and everything running into each other – and you’d have trouble fitting more than three scoops into a small cup anyway!).

They helpfully offered a taste of the flavours we were interested in to help us decide (but don’t expect this in the UK – service is different here. They will rarely offer a taste, but if you asked nicely you could probably try one or two of them).

The pistachio recommendation was, as, um, you already now know, spot-on. I could have gone back for seconds and thirds. The almond was great too – but I slightly preferred the pistachio. 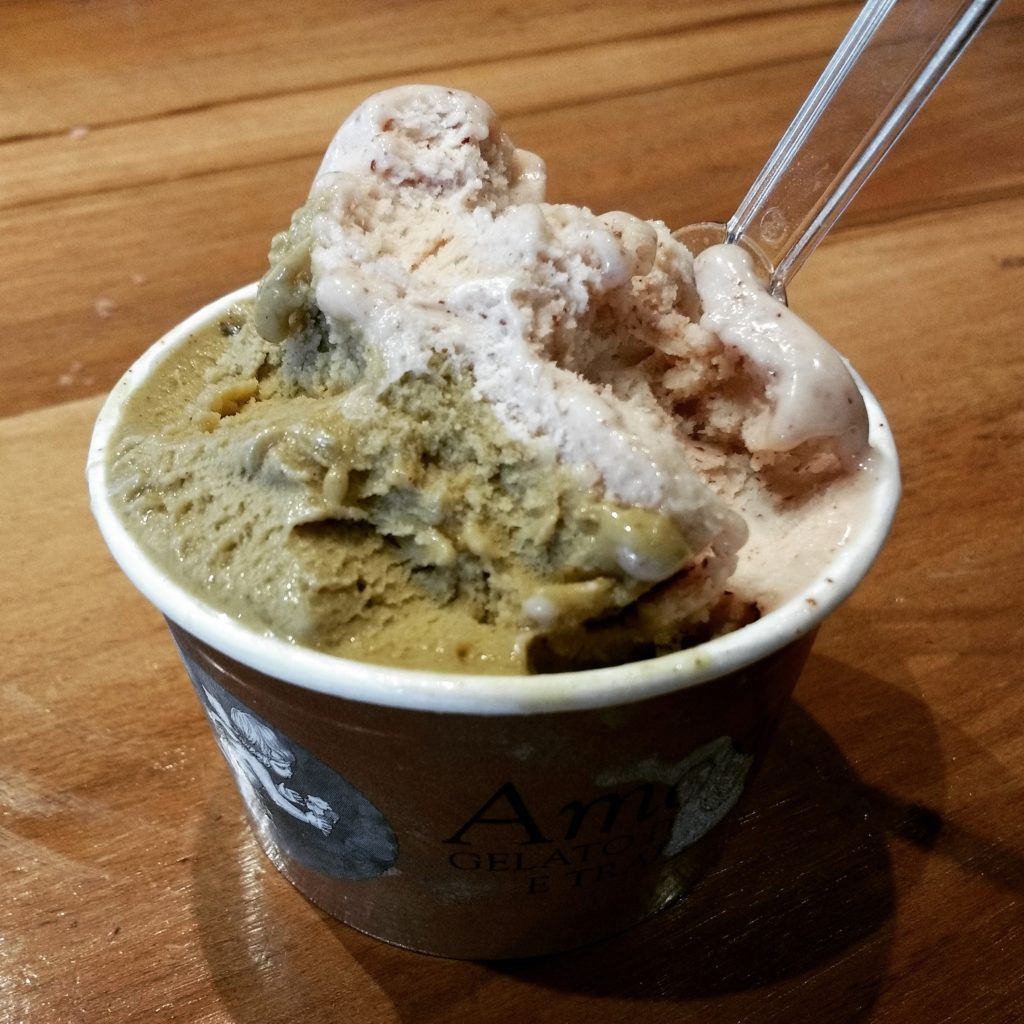 There are high stools and tables to eat at, and a few regular tables. The decor is best described as nouveau fake..um..old Italian (gold and cherubs everywhere) but it’s pleasant enough. If you come at a busy time you’ll be hard pressed to find a table, so plan your visit carefully, or, weather permitting, go eat your gelato in a nearby park.

Amorino isn’t cheap, but it’s the price you’d expect for a quality, artisanal product.  A couple of large cups (which aren’t really that large) will set you back almost 12 quid, but honestly, if it tastes like 12 quid, I’m happy to pay it. London can be extortionate and it’s easy to find yourself paying through the nose for mediocrity, but this is not the case in Amorino.

Once back in London, I decided to try the branch in Fulham Broadway with a friend.

The set-up was exactly the same as the NY branch. This time I had hazelnut and chocolate flavours. OMG – the chocolate is also incredible. Rich; dark; earthy; just the right amount of sweetness, not at all bitter. The hazelnut flavour rivalled the pistachio, and may be my new favourite. It has crunchy bits of sugared hazelnut in there for extra texture and is just divine.

I had another visit to this branch last week – this time with my partner. We went around 9pm. This Amorino is open until 11pm, and it’s nice to be out later in the evening somewhere that isn’t drinky – which is usually your only choice for late evening outings here. We decided to go all out, get large cups and have three flavours each. I got the hazelnut (OBVS), some strawberry, and some lime and basil. 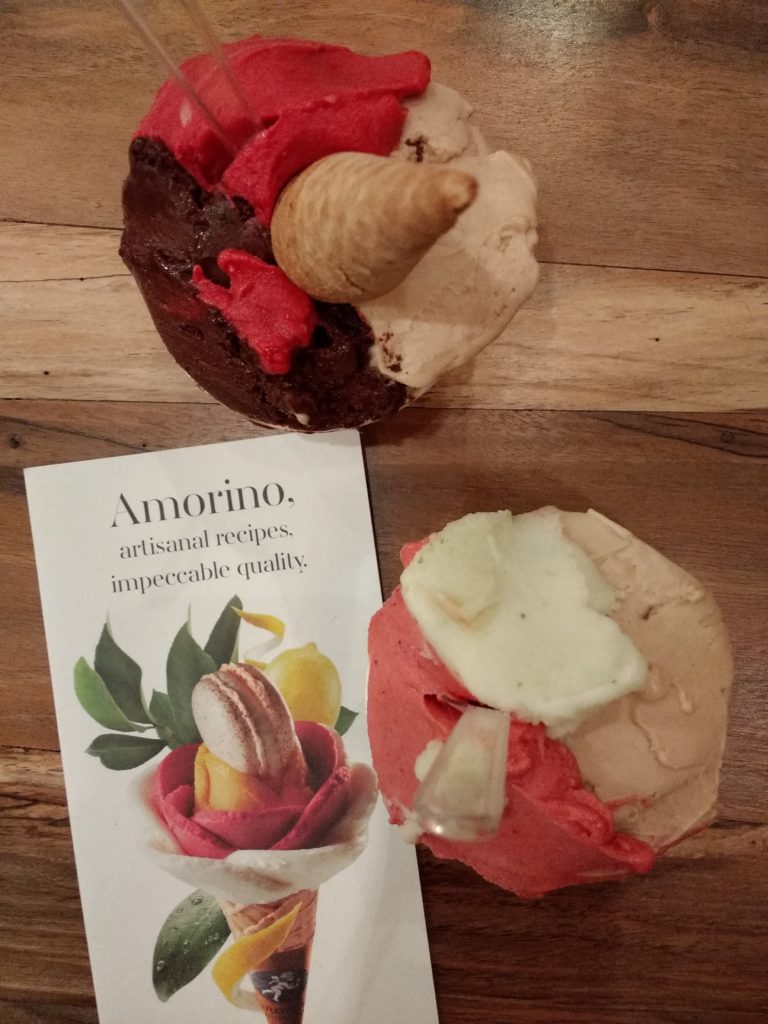 I’ve noticed the hazelnut and pistachio are like Clarke Kent and Superman, they never seem to be around at the same time!

The strawberry was great; I’d definitely get it again. The lime and basil I thought would be interesting because of the basil but….not so much. It just tasted of lime, which is nice enough for one or two mouthfuls, then you get kinda all citrussed out and you’re DONE WITH THE CITRUS.

I reckon on future visits (and there will be MANY) I’ll stick with the hazelnut, pistachio and chocolate – but I could be tempted to try the passion fruit and mango flavours at some point too.

Go at a non-peak time, grab a cup of the pistachio or hazelnut or chocolate flavours (or all damn three), and take your time relishing and savouring this artisanal frozen gustatory delight.