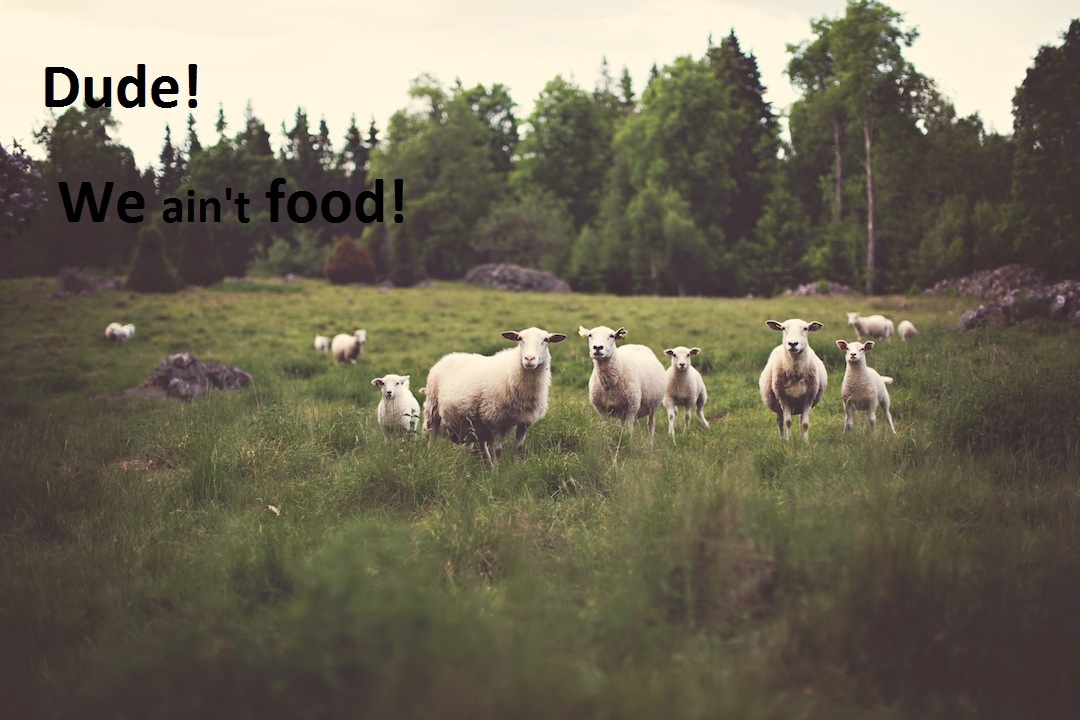 Sounds BLINDINGLY obvious and you may think I’m being patronising. But people who eat animals do their absolute best to disassociate themselves from other animals, and make themselves seem something apart. They have to – in order to continue eating them.

The word for us – ‘human,’ is just a word (like lion) that differentiates us from other animals like penguins and sheep.

This differentiating word doesn’t mean ‘has dominance,’ or more intelligence, more conscience, or more anything. If we think it does, we think that because WE are human.

It’s exactly like someone saying ‘blond hair is best,’ when THEY have blond hair.

Why have we been taught to distance ourselves so much from other animals?

Why do we say ‘we love animals’ like they are separate to humans?

Why do we call someone an animal to insult them, again, as if animals were separate to humans?

Why do we say humans AND animals? Sorry to be Pete the pedant here but unless we are, in fact, vegetable or mineral, this is inaccurate. If you must differentiate, the most you can say is ‘human and non-human animals,’  though even this is very human-normative, i.e. arrogantly assuming that humans make up the majority and are ‘the norm’ when, in fact, considering there are around 7.7 million animal SPECIES in the world, and ants alone (according to a BBC documentary) number a hundred trillion; this indicates, quite fantastically, otherwise.

So that we can continue to kill and use other animals for our agenda (which is NOT even one of need), we have to desensitise ourselves by making them seem as different to us as possible.

And my, how we’ve done this!

Can’t we see that this is what we’ve done to any living beings we’ve wanted to colonise/enslave/subjugate/kill/rape?

Where other animals are concerned, we tell ourselves:

Unsurprisingly, it has not been highly publicised that prominent scientists now realise that animals are as conscious as we are. As for the rest, WE created the books. WE created the food-chain, and IF animals don’t know they die (which is completely not knowable) do they need to? Why is it better to know this?

Funnily enough, there is ONE time it serves us to liken ourselves to other animals, and that’s THIS argument humans use to justify eating them:

(FYI, it’s not the same thing. Lions are obligate carnivores; they HAVE to eat other animals to survive. We are not; we thrive and are so much healthier NOT doing so).

Now we can’t have it both ways. Are we like other animals or not??

If we were to make ourselves see the commonalities and not the (insignificant) differences between us and other animals, we wouldn’t be able to kill and eat them.

In the US during slavery, slave owners focussed on and played up the colour of skin and the different shaped skulls Africans had to whites, so they’d be able to see them as not quite as ‘human’ as THEY were, and therefore not feel bad enslaving them.

Some men have traditionally focussed on the purely mechanical physical differences that women have (to them) in order to see women as other than human and therefore justify controlling and using them.

As for other animals, not only do we see all the physical differences between us, but we also see them as uncivilised, base and less intelligent.

It’s not animals that are destroying the planet. It’s not animals that have razed forests to the ground, caused air and water pollution (apart from when WE intensively farm them for ‘food’), depleted topsoil and fossil fuels, or caused droughts and ‘plastic islands’ in the oceans.

THEY only take what they need, and actually CONTRIBUTE to the planets ecosystem. We look at the ecosystem as if it revolves around humans. But did you know that if all humans died tomorrow, the earth would eventually replenish itself with all the plant-life it had lost, its atmosphere would slowly purify, and it would utterly thrive without us? By contrast, if even the tiniest creatures, like bees, or ants were to die tomorrow, the entire ecosystem would collapse.

Look at how humans kill each other on silly pretexts, then read about how ants cooperate with each other and work in unison for the best interests and health of the colony.

We’ve all seen the Youtube vids of animals who are best friends with an animal from another species (often the most unlikely ones); the cat that adopted the squirrel; the male dogs that adopt kittens (this also blasts right out of the water another two tired old stereotypes that all females – and only females – are nurturing!). By contrast, we can’t even get on with our own species. We fight and kill other humans because they believe something a bit different.

It’s not animals that get obese, lollop around malls aimlessly, and get diabetes. Look how lithe and sinewy squirrels, horses, lions and monkeys are; their bodies are perfect for the needs of their habitats.

It’s not animals that create constructs to control, reduce and diminish each other.

We need to dehumanise in order to oppress humans. And in the case of other animals, we have to see them as different and as inferior to humans as possible to desensitise ourselves to their suffering – so we can eat them.

All oppressions are the same and need an ‘other.’ We’ve ‘otherised’ animals that are not human to such an extent we don’t even know we’re doing it.