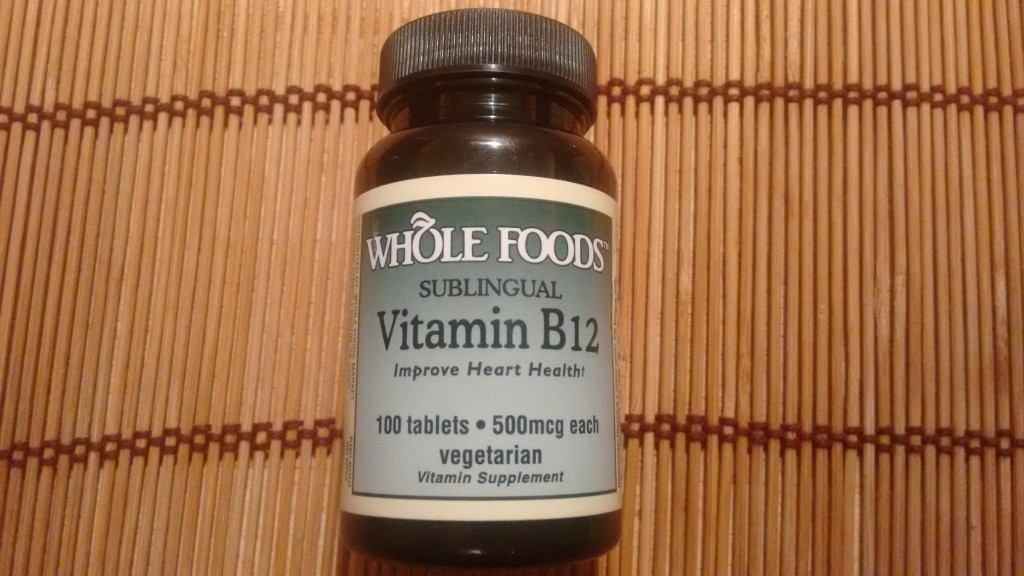 There are those who love to chirp about how a vegan diet cannot be natural because it needs supplementing with vitamin B12.

Little do they know.

Vitamin B12 is a bacteria that used to be found naturally in soil and water. It is not PRODUCED by animals or plants. Animals can absorb vitamin B12 from their intestinal tracts. Humans also have it in their intestines but can’t absorb it efficiently from here, so they either acquire it from animal products, or preferably(!) take a supplement.

Vitamin B12 is vital for a healthy nervous system, and to ensure the proper formation of red blood cells.

In years gone by we would have obtained plenty of it from the soil our veg and fruit were grown in. Now however, our topsoil is not of the same quality and doesn’t contain the same level of nutrients; and as we sterilise everything to the max, we just can’t guarantee getting enough from plant foods without supplementation.

We would also have acquired B12 from water in the past. Excessive chlorination put paid to that, so water is no longer a source either.

Should anyone lay the old ‘it’s not natural to be vegan blah blah blah B12’ chestnut on you, you can hip them to THIS fact: Meat eaters are just as likely to be deficient in B12 as vegans these days and oftentimes more so, by virtue of the fact that someone who hasn’t questioned their diet and just eats whatever they’re given or whatever is advertised to them, is not going to be aware of their B12 needs, and even less aware of how to fulfil them. Vegans, on the other hand, tend to be well-educated folk (they have thought about how their dietary habits impact the world outside themselves) and have likely read up on how to get the nutrients they need. That’s why, these days, lots of dieticians advise meat eaters to take a B12 supplement too!

As a nutritional therapist, I would definitely advise anyone transitioning to, or already following a vegan diet, to take a quality vitamin B12 supplement daily.

It is thought that there is vitamin B12 in fermented foods such as kimchi and miso. These are great foods that are ideally part of a healthy diet anyway, but I would NOT rely on these.

You MAY be getting some on your veg and fruit, but the amount is unmeasurable and it’s unlikely that you’ll be getting enough. Better be safe than sorry – take it.

The doctors I often refer to who are experts in plant-based nutrition recommend a minimum of 250mcg per day.

There are three forms of B12. The most common – and probably the one you’ll find in your health shop is cyanocobalamin, and this is fine.

It IS important to take it. You may be fine for a very long time without taking it but the symptoms of B12 deficiency, if and when they hit, are NOT cool. They include fatigue, rapid heartbeat, uneven moods, easy bruising, bleeding gums, numbness in extremities, and sometimes even dementia.

Don’t worry about OD’ing on B12. I mean, don’t go crazy with the tablets, just take one a day, but don’t fret that you could be overdoing it if there might be any already in your food. It is very difficult to experience B12 toxicity – you’d have to take a ridiculous amount to suffer this, and your body will probably excrete what it doesn’t need anyway.

The brand I take is GNC B12 tablets. When in the US I buy Whole Foods own brand B12 sub lingual tablets. B12 is inexpensive – so there is no excuse for skipping it!

Taking your one B12 supplement every day is best practise, though if you DO forget to take it occasionally, don’t sweat it. B12 can store up in the body, so if you’ve been taking it for a while, you probably have enough to see you through. Just make sure you take it most of the time.

And if you buy organic veg and fruit from a farmers market, don’t be too fastidious about washing them. I mean, get rid of huge globs of soil and bugs of course! But don’t over scrub them. It’s always great to get a bit of B12 the way we were meant to get it!

One thought on “Just B (12) Yourself! (Why Supplementing With Vitamin B12 Doesn’t Mean A Vegan Diet Isn’t Natural)”