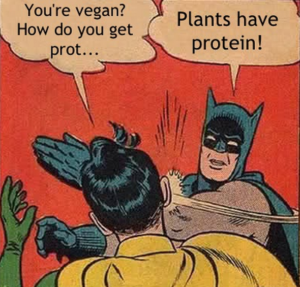 When you’ve been vegan as long as I have, you’ve heard it all. This may sound sad and jaded, but really it’s FANTASTIC, because it means there is no question or dumb comment that stumps me anymore. I have an answer for every single one, and I’m prepared to share some of them with you now – you’re most welcome!

If you are thinking of transitioning to a plant-based diet, or are easing in that direction, DON’T BE PUT OFF BY THIS POST!! It’s not that I, personally, am enduring dumb comments all the time – I’m really not. It HAS happened from time to time though, and you’ve just got to read any comment section following an internet article on veganism and you’ll see the full gamut of clown biscuits coming out to bleat their fear-driven, non-science based drivel (can you tell they piss me off?)

To be very clear – I have NO problem with curious people asking questions (see next point), but those who just blindly parrot and repeat myths, and/or mock, having done precisely zero research for themselves – well, I have no patience with these chump buckets.

We are currently living in a largely non-vegan world. Even people in countries whose diets, culturally, are not meat-based, are aspiring to eat more meat and dairy as they perceive this to be a more affluent, ‘western’ way, so it’s normal that there are going to be questions from those who follow the dominant carnist narrative. It should actually be encouraged – if the questions are curious and genuine.

It’s pretty easy to tell who is asking a genuine question and who is being a dumbass. If it’s face to face you can easily tell someone’s intention from their energy, and if it’s online, you can tell by their tone. The kind of question they are asking is usually the biggest clue! If they are petulantly stating ‘plants feel pain too, you know,’ it’s kinda obvious they’re just trying to push your buttons. If they’re asking you where you source your iron as they would be concerned about anaemia if they were to go vegan, then take the time and explain (or refer them to me!)

So here are my A’s to those dumb old Q’s:

Dumb question: (seeing as how we’ve already mentioned it) Don’t you know plants feel pain too?

Answer: Lordy, lord, LORD. Plants don’t have a central nervous system, so HOW can they feel pain? Also, if you are so interested in the pain of plants, then maybe you’d better go vegan straight away, because if you eat meat and dairy then MORE plants are killed for you, as not only are you eating plants yourself, but guess what they feed the animals you eat and drink secretions from? You guessed it, plants.  Save more plants today by going plant-based, oh plant-saving one.

DQ: Where do you get your protein?

A: From the same place that other strong animals (elephants, horses, gorillas and rhinoceroses) get theirs – from plants.

DQ: Where do you get your calcium?

A: Calcium is a mineral; therefore it comes from the ground. So I get mine from the same place cows get theirs, from green plants that grow in the ground (though these days most conventionally farmed dairy cows don’t graze from the ground, so their feed is supplemented with calcium). It’s far better to get your calcium first hand, than to have it after it’s been through the cow.

DQ: But lions and tigers eat other animals, it’s the circle of life isn’t it?

A: Awww, have you been watching your Lion King DVD again?

Circle of life for them, perhaps. For you – no. They are obligate carnivores. This means they have no choice but to eat animals. Their bodies are built for it. Their intestines are way shorter than ours, so meat can pass through their system in an appropriate amount of time without putrefying. They can run fast enough to catch their prey, and have LONG canines and claws to kill it swiftly and rip it apart. You do not. You eat the animals that are the slowest and most docile and expect others to skin and de-bone them. Lions and tigers can eat the meat fresh and raw, and can even eat slightly less than fresh meat, as they have enzymes in their stomachs that help stop them getting sick. You have to cook it and flavour it to make it safe and tasty for you to eat. And you try eating meat that’s not quite fresh and it’ll be coming out of both ends quicker than you know it. Does your mouth water when you see a dead animal in the middle of the road? Do you get hunger pangs when you see a sheep in a field? No? Then your eating habits resemble a lions to the power of ZERO.

Also – why pick on ONE thing a lion does to emulate because this suits your agenda? If you think you’re like a lion, why not go sniffing other people’s butts, as lions do with each other?

Dumb Comment: But vegans eat soy, and soy farming is destroying the rainforests.

A: While a lot of rainforests HAVE been razed to the ground to grow soy and other crops – you will find (with a minimal amount of research) that the vast majority of these crops are grown for livestock feed. Also plenty of vegans DON’T eat soy. In this world of plenty, soy does not have to be the staple of a nutritious vegan diet. There are lots of alternatives.

DC: You don’t have to be vegan. I don’t eat supermarket meat; I only eat grass-fed, poetry-read, tucked in bed animals. This is sustainable and ok.

A: For whom? The 3 reasons for going vegan are 1) for the animals 2) for health, and 3) for the planet. I’m assuming you are choosing to eat ‘happy’ meat to likewise lean towards a healthier, cleaner and more ethical diet.

The truth is that ‘happy’ meat fulfils none of these criteria. It is barely healthier – it still contains as much artery clogging saturated fat, cholesterol and hormones as mass-produced meat, so you are avoiding none of the diseases caused by these. ‘Happy’ meat is actually LESS environmentally sound, as grass-fed animals emit significantly more global warming methane than factory farmed animals. Also, a lot more land is needed to raise these animals. If everyone in the world eventually decided to eat ‘happy’ meat – there isn’t enough land on the planet to provide this! And you think it’s a more animal friendly way to farm? How? Healthy animals are still slaughtered (often in the same slaughterhouses as conventionally farmed animals) after only a quarter of their natural life-span. Free-range chickens still live in inhumane, barbaric conditions, with all male chicks being superfluous and ground up alive.

DC: Every vegan I’ve ever seen is pale, scrawny and weak.

A: (If I get this comment in person I just point to myself and look quizzically at the bearer of the DC, who will see clearly that I’m healthy, strong and bursting with vitality). How many vegans have you seen? I’ve been vegan twenty-five years and haven’t actually seen that many. There are plenty of meat-eaters who are pale, scrawny and weak. If someone is these things, they are not eating properly whether they’re a vegan or not. Why are you holding vegans up to a higher standard than all the weak, skinny or obese and unhealthy meat-eaters out there?

There are plenty of vegan sportspeople, athletes and bodybuilders who are achieving their best ever performances on a vegan diet.

A: Really? From which period did these particular ‘cavemen’ that you are referring to come from? Even if you mean (and you probably do) the paleolithic era, this lasted over two million years. Did every single cave dude eat the same way over that time span? Are you sure? And EVEN IF they did (which they didn’t), the very fact that they needed all those spears and arrows to kill their dinner, instead of just chasing it and ripping it apart like obligate carnivores (see DQ4), kinda shows that even if animals were occasionally a food source, it was not a natural one for them.

DC: My friend went vegan and she got really tired and sick. Her body just NEEDED meat. She felt fine when she went back to eating it; in fact she cried when she took her first bite of beef and felt the strength flood back into her body. (Yes, I swear I’ve read this kind of BS multiple times)

A: Was she a completely healthy meat-eater previously? Was she fully informed on how to nourish herself on a vegan diet? Even the conservative American Dietetic Association knows that ‘…appropriately planned vegetarian diets, including total vegetarian or vegan diets, are healthful, nutritionally adequate, and may provide health benefits in the prevention and treatment of certain diseases. Well-planned vegetarian diets are appropriate for individuals during all stages of the life cycle, including pregnancy, lactation, infancy, childhood, and adolescence, and for athletes.‘

Just as one should make the effort to ensure they get a full quota of vitamins, minerals nutrients and fibre on a standard diet, so one should on a vegan diet. There is no need for anyone to get tired and weak on a varied vegan diet that contains plenty of energy giving whole grains, beans, nuts and seeds – not just the fruit and veg. No human body NEEDS meat. They can get all the nutrients they would get from meat in plant-based foods, and they’re usually of better quality and more bio-available.

Oops! I realise some of these aren’t exactly snappy answers. But I hope there are some things you can take from them. Try and always keep your cool, and if someone just isn’t listening and continues to come out with BS so they can hear themselves talk – simply walk away. Give your energy and time to the genuinely curious.

Next week we’ll tackle the kind of DQ’s that ask if a vegan diet is restrictive, depriving and no fun (SPOILER ALERT: This is BS too!)

16 thoughts on “How To Respond To The Dumb Questions And Comments Vegans Get, Part 1”