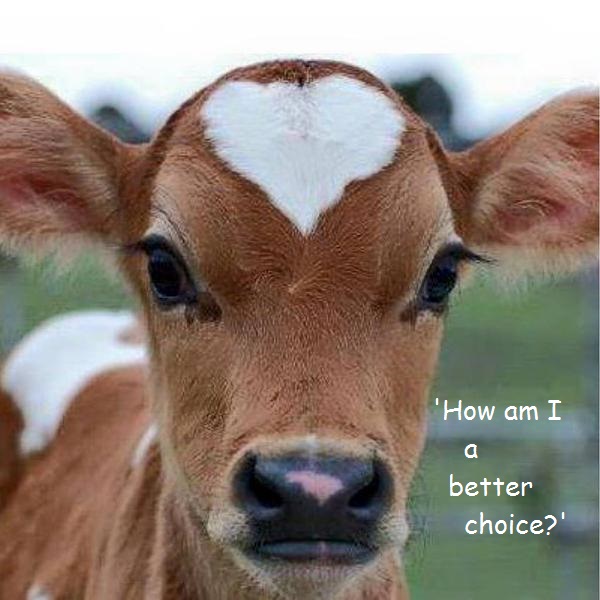 I’ve written about this subject on previous occasions, but I’m seeing and reading things all the time both on social and regular media that tell me this message needs to be put out there continually and consistently.

Look. I make clear on my FAQ’s page that I love consulting with anyone who is reducing their animal product consumption by ANY amount.

I get that we’re all at different stages on this path; that we’re all informed by completely different influences; and that we all approach things in different ways. Sometimes it definitely IS better to start upgrading your diet very slowly; maybe eliminating one thing at a time. This can be more sustainable in the long term. If you know yourself enough to know that you’re not a ‘cold turkey’ type and that you assimilate changes into your life better by making them slowly, this is laudable.

Any reduction in a habit that is negative to all concerned is amazing, and I have so much respect for anyone who starts ANYWHERE on a plant-based path – EVEN MORE SO for those coming from a meat and dairy heavy diet, as that’s an even bigger change.

Can you so tell I’m building up to a rant though?

What gets properly up my nose, is those who have made an effort to cut down their meat consumption, but make the point (loudly) that they are ‘careful’ to ‘make better choices’ when they do consume it.

I saw a French TV report yesterday, where, in light of all the information entering the mainstream regarding our overconsumption of animal products, a reporter goes vegan for 45 days to see what happens. He visits the doctor at the beginning, has his blood work done, his cholesterol tested and gets weighed, etc.

During the 45 days, he not only learns about what to eat and how to read labels etc, but is shown some pretty horrendous stuff taking place in slaughterhouses, and sees chicks being put in meat grinders and garbage bags.

At the end, he assesses what he’s learnt. He revisits the Doctor who, unsurprisingly, tells him his blood work is improved, he’s lost weight and his cholesterol is down.

The Doctor then has a chat with him and says (despite all the positive effects on his body), that he shouldn’t cut anything out of his diet. That he can eat meat, but to eat ‘better’ meat. To think about where the food is coming from rather than just putting anything in his mouth.

When the guy reports back to the studio at the end of the experiment, he says that although he is no longer vegan, he’s learned a lot. He says he now realises that animals aren’t a ‘product,’ that they are sentient beings. He says he will think before eating from now on and will make ‘better choices’ when he does eat animal products.

Um – if you know a being is sentient, how is there any better way to have it killed for your consumption?

There ARE no ‘good’ choices when it comes to eating animal products.

You:  ‘I thought you said you respect anyone who reduces their animal product intake by ANY amount?’

But justifying eating meat by saying the little you do eat is better quality (grass-fed, poetry-read, tucked-in-bed or whatever) is just BS.

And it IS just that, a justification. It’s totally giving yourself a reason to continue a harmful habit, just in smaller amounts. It’s kidding yourself that it’s ok, and gives you absolutely NO reason to evolve further.

If someone just gives up chicken, for example, because they know themselves well and this is all they can manage for now; I believe this is admirable. A positive change has been made, and the door is open (once they’ve become comfortable with their new chicken-free life) to make more positive changes further down the line.

If you truly understand why all animal product consumption is inherently harmful, you can only move in one direction. If you are working on eventually replacing all animal products you previously ate with plant foods (however slowly, it doesn’t matter) this is surely more logical and more in alignment with your new understanding of animals being fully sentient – than reducing consumption somewhat, but tricking yourself into believing that the products you DO eat are minimally impactful.

If you really GET ‘why’ you’re changing your diet and set your intention to do this, but find you can only reduce your meat consumption a little for now – that’s cool. I’m confident that when you are ready (and you will know when you are) you will make more positive changes.

Just please don’t tell yourself that there are ANY better choices when it comes to consuming animal products because it simply IS. NOT. TRUE.