You do not need to eat soy AT ALL if you go vegan, repeat: NOT AT ALL.

Soy is a great source of protein (among other things) and it used to be thought that to replace all the animal protein you were going to be missing if you went vegan, you’d need to eat a s**t ton of soy products.

Protein is in pretty much EVERY plant food. How do you think herbivorous animals get their protein? You don’t see cows, sheep, pigs, elephants, horses or gorillas chowing down on edamame or slurping miso!

If you’re eating a whole food, plant-based diet you’ll be getting plenty of protein. Don’t even worry about it. Even if you’re a junk food vegan (not recommending this at all but just to make the point) you’ll be getting enough protein.

Dr Neal Barnard, from the Physicians Committee for Responsible Medicine:

…soy products are strictly optional. A healthy vegan diet could be based on a Mediterranean tradition, emphasizing vegetables, fruits, chickpeas, and pasta. It could be based on Latin American tastes, with plenty of beans, tortillas, and fresh fruit. Soy products come from the traditions of Asian countries where people are generally thinner and healthier and live longer than Americans. But soy is still entirely optional.

Protein just isn’t a problem, even in a diet devoid of soy.

That said, as long as you’re not allergic to it, soy is a great addition to your diet.

Personally I adore agedashi tofu, and soy milk is my cow’s milk replacement of preference.

But it takes such a long time to bust old myths.

And the myth that soy does all sorts of weird things to your body is a very deeply entrenched one.

Hopefully in time (by force of myself and fellow plant-based professionals writing posts that reference the independent studies that have all found that soy is not only safe, but beneficial), this old chestnut will be destroyed once and for all.

We know soy has been eaten frequently for centuries in several Asian countries, countries that are certainly not known for having a man-boob or breast cancer problem.

In fact, breast cancer in Japan and China was exceedingly rare, until they started adopting the more ‘western’ habits of consuming dairy and larger amounts of meat, then the rates increased to reflect that.

‘But soy contains estrogen, and estrogen causes breast cancer’ you may be thinking.

This sentence is not wrong. Soy DOES contain estrogen, and excess estrogen IS a factor in lots of breast cancers.

Lets be clear on who the real villain is here!

Animal estrogen from meat and dairy is similar to human estrogen; it functions in the same way as it does in human female bodies – after all, we are animals too. It can therefore accumulate excessively in someone that eats animal products regularly and have any number of negative effects – two of which are breast cancer and man boobs – the exact two main concerns that people have about soy!

Phytoestrogens operate in a totally different way. When we consume them in the form of soy isoflavones they have been shown to be beneficial – even to breast cancer patients and survivors.

Because they have the effect of regulating your body’s estrogen levels. There is a complex scientific explanation on how they do this, but simply put; if your estrogen levels are low, they can bring them up to a level suitable for your body’s specific needs; if they are too high, they help you excrete the excess.

Magic huh? I don’t mean to get all woo-woo on yo’ ass, but if soy isoflavones (and other beneficial phytoestrogenic plants) are not a gift from the universe then I don’t know what is!

This activity of soy in the body has been studied, and we now know that soy categorically does NOT promote breast cancer. It actually acts as a protective and preventative agent, and can boost longevity in breast cancer survivors.

And no, soy doesn’t make men grow breasts either. Man boobage is due to obesity and the estrogens men are ingesting when they eat animal products.

We also now know that it doesn’t screw with your thyroid either (another once-believed harmful effect of consuming soy).

But the great news is, you can avoid having thyroid troubles in the first place by following a whole foods, plant-based diet! Sorry if that sounds smug, but if something is true, I’m gonna sing it from the treetops!

As well as being an excellent protein, soy is also a great source of calcium, vitamin C, thiamin and folate. So if you like it, and aren’t soy sensitive, go ahead and get creative with the tofu, miso, tempeh et al.

Don’t forget. The dairy industry is very powerful and must currently be feeling very threatened as more and more people choose dairy milk alternatives. There are big concerns in whose interest it is to propogate myths discrediting soy. If you need reassuring, great; check everything out for yourself, we can never be too informed, but CHECK your sources. Always go for independent, peer-reviewed studies where possible. 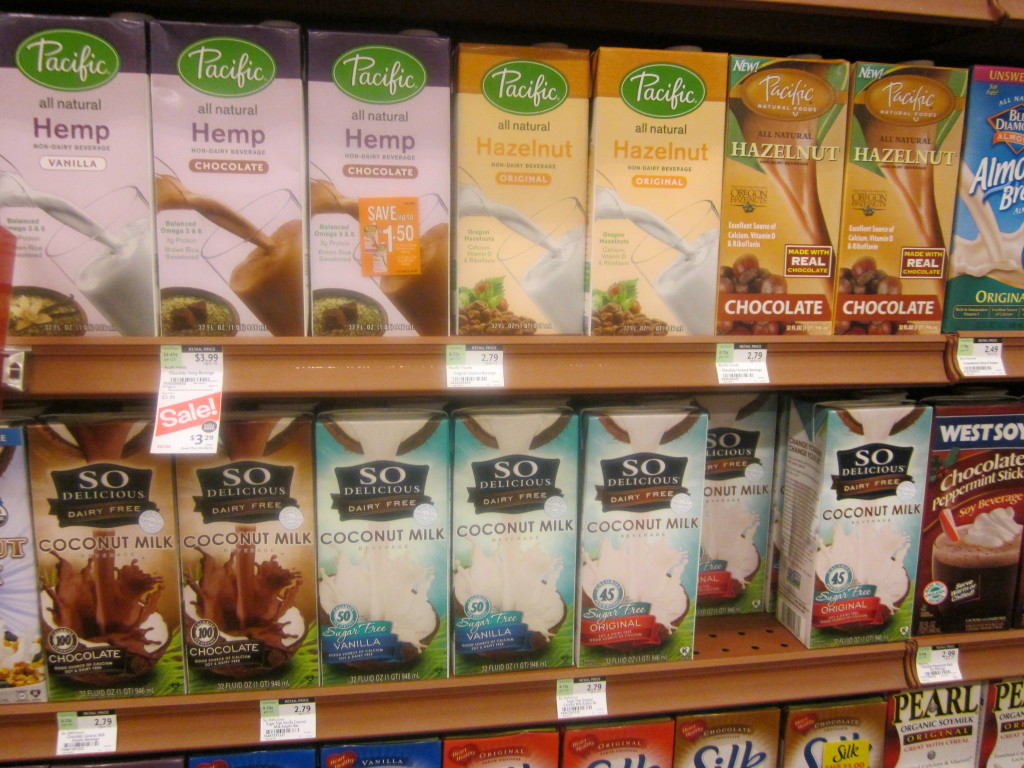 As for which non-dairy milk is the best? This is subjective, and ultimately, completely down to your taste. Whichever one(s) tastes the best to you, is the one that will help you transition to and sustain a satisfying plant-based diet, so go forth and try them all till you find one (or a few) that suits.

There are superior and inferior, healthy and less healthy products however, so here’s the deal.

Firstly, you may well find you don’t really need a cow’s milk alternative. I sometimes just use water on my breakfast of oats, raisins, nuts and seeds, and it’s just fine, the liquid is just to moisten the dry oats (and the water kind of turns to oat milk in the bowl!), so it works perfectly.

As I mostly drink white/jasmine/green tea, no milk is needed for this either.

Ok, so let’s tackle the most controversial, common, non-dairy milk first. The milk of the soy.

Some people don’t digest soy too well, so if this is you, or if you’re allergic to soy- you have PLENTY of other options.

Ideally you want your milk to have as few ingredients as possible – just soy beans and water. The best one in the UK is Provamel Organic Unsweetened, which has just these two ingredients, but it is quite expensive. The Tesco and Asda Organic Soy Milks have water, soy beans, and natural flavouring. I’m not sure what the natural flavouring is, but I don’t use this milk often, and it’s a more acceptable price, so this is fine for me right now. Lots of US brands tend to have several other ingredients in, including added thickeners, salt, or vitamins.

Guess what? Exactly the same paradigm applies to all the other non-dairy milk alternatives. Whether its oat, hemp, almond, cashew, coconut, flax, brazil nut, rice, hazelnut, tomato or spinach milk (ok, I made those last two up), my recommendations are always the same:

– If you can, make your own. There are plenty of ‘how-to’ vids on Youtube, and a few on the Vitamix site. Again, only if you can, make sure the ingredients are organic. You’ll be saving money by not buying cartons of milk. Don’t worry if you can’t budget for organic – you are still avoiding a ton of bad stuff by not drinking cow’s milk.

– If you do buy your milk, make sure to choose the one with the least amount of ingredients (ideally just *nut/seed/grain*, water). If you need it sweetened, it should only have apple juice added.

– If you are desperate, and can only find your chosen non-dairy alternative with a bucketload of ingredients – you REALLY don’t want it to contain sugar. Try above all to get one without sugar. Even salt as an ingredient is better than sugar.

Although I mainly use soy milk, I love almond and coconut milk. I must admit I’ve yet to try flax milk, but it’s on my to-do list for my next visit to the US, where it’s more widely available.

What do kiddos like? I’m sure this varies too, but I’ve given very neutral tasting soy milk sweetened with apple juice to non-vegan kids, and also rice milk without any complaints. If you have a kid that goes crazy for a certain non-dairy milk, please let us know in the comments!