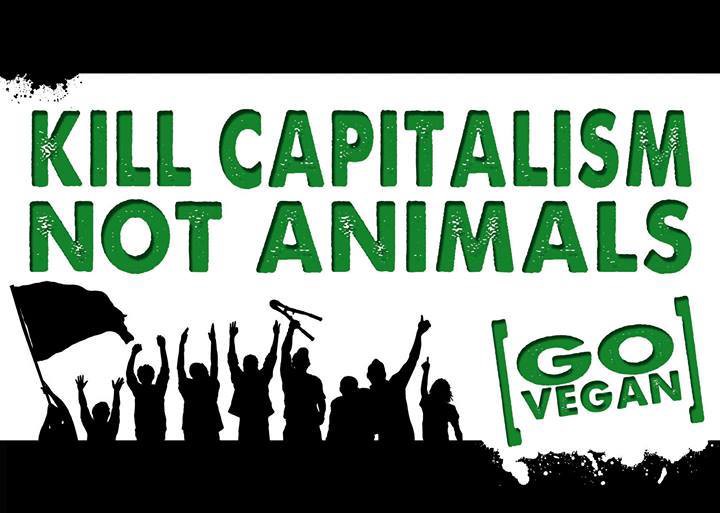 Lol…if you haven’t realised already, I don’t write the sort of blog posts that other wellness types do, i.e. give you a little helpful content and then yell ‘buy my shit.’ I mean, I totally should, being someone who relies on people to buy my shit, but ugh, I can only write about what’s on my mind.

This is what’s on my mind right now:

I heartily applaud those of you who participate in Cubes of Truth, vigils for animals about to be slaughtered, animal rights marches etc etc.

These actions are effective, I know, and this post isn’t meant to throw shade on any of them.

As much as I respect it, I’ve never participated in any action of that sort. Don’t get me wrong, I’m always posting vegan advocacy stuff on social media, and continually having conversations where I’m encouraging folks to think about veganism.

I think it’s that I’ve been vegan such a long time – in the beginning there wasn’t as much of that stuff going on, and there wasn’t social media, so even if marches etc were going on, I wouldn’t have had much awareness of them.

But in the last few years, it’s probably more because I’ve become very aware that animal rights and speciesism are not single issue. That doesn’t mean we shouldn’t tackle them in a ‘single issue’ way sometimes – Cubes of Truth, marches etc – of course we should. It’s just that I’ve come to believe very strongly that there is a bigger foundational cause of animals being ‘otherised’ by humans that also needs addressing.

I feel like we should address the cause and not just the symptom, if you will.

It can be argued (and in fact IS by many including Martin Luther King) that the driver of continued racism, sexism and even speciesism – in fact all oppressions – is unfettered capitalism, which, in case you haven’t noticed, is the state we are living in now.

Regarding how capitalism is tied to racism, King argued thus:

“You can’t talk about solving the economic problem of the Negro without talking about billions of dollars. You can’t talk about ending the slums without first saying profit must be taken out of slums. You’re really tampering and getting on dangerous ground because you are messing with folk then. You are messing with captains of industry. Now this means that we are treading in difficult water, because it really means that we are saying that something is wrong with capitalism.” – Speech to his staff, 1966.

“We must recognize that we can’t solve our problem now until there is a radical redistribution of economic and political power… this means a revolution of values and other things. We must see now that the evils of racism, economic exploitation and militarism are all tied together… you can’t really get rid of one without getting rid of the others… the whole structure of American life must be changed. America is a hypocritical nation and [we] must put [our] own house in order.”- Report to SCLC Staff, May 1967.

Sure, we ended slavery and had the Civil Rights movement. But there are now more people incarcerated in US jails than any other country, most of them brown-skinned (African Americans and Hispanics make up 56% of the prison population), and  most of them employed while in prison, by multi-national companies, on VERY low wages – like 4 cents an hour – to do extremely menial jobs.

Where there is profit in exploitation, it will be done. And even if we think we are progressing, by trying to stop child exploitation and slavery – corporations and company owners will just find a different section of society to exploit. Capitalism is an energy that’s entire point is to grow exponentially, and fuck the consequences. A little like cancer I guess.

If MORE profit can be made by exploiting brown people, so be it. If MORE profit can be made exploiting women, so be it. Animals, the same. There is no reformation of capitalism. You can improve an area, maybe make it a little more socially conscious, this is true – but it’s a bit like a pesky air-bubble, that no matter how you try and get rid of it, that insidious energy will just go somewhere else. For example, we ended slavery in America, but that just led to the Jim Crow laws. We ended those, kinda, but now US for-profit prisons (thanks Bill Clinton!) are disproportionately full of black prisoners who didn’t get due justice- see point above.

It IS true that people ate animals before capitalism existed. Women and people of colour were otherised too. But capitalism took this to whole new levels – by its very nature it sees everything and everyone as commodities, so where money could be made off the backs of the oppressed, for the oppressors, this naturally happened.

This is an exceedingly complex subject – there are myriad ways in which capitalism has reinforced oppressions (while appearing to improve some things), and a blog post is not going to address all of those.

My point is, a move towards a more socialist society will be a move towards a more vegan one. US readers – whatever you’ve been taught, socialism IS. NOT.THE.SAME.AS.COMMUNISM! It just means prioritising people and not profits. It means caring more about the welfare of people than the welfare of the markets. Out of the vegans I know, most if not all have socialist values. You probably do too, whether you know it or not. You believe in free university tuition? Publicly-owned national services? The regulation of banks so they can’t get too big for their boots and cause another crash like in 2008? Think the rich should pay more tax, the poor less? Free health care for all? Bingo – you have socialist values, and they are nothing to be scared of. Jeremy Corbyn is known to be vegetarian and I’ve heard those that know him say he’s actually vegan. The French politician who is on the socialist left is not yet vegan, but is aware that he should be, is trying his best and talks often about the plight of farm animals.

Thus, I’ve come to believe that in order to most effectively fight for animals (and women and people of colour) and against the forces that enslave and commodify them, then working towards a more socialist society has to make up a large part of our activism.

The neoliberal/neoconservative (they are the same thing – the neoliberals are just a little more polite is all) economic models that we currently have are not gonna cut it, in terms of how we look at the ‘other.’ They both uphold the rabid capitalist narrative. If we want to see a change from the ground up, we have to change the system.

2 thoughts on “End Capitalism – Save Animals And The Planet”