I’ve been blogging for almost two years on all things vegan and I’ve never yet written a post on protein.

Because SO many excellent vegan educators have written on it before me, and I genuinely thought we were past that. I thought there was enough info out there with the truth on how much and what sort of protein we actually need and how we’ve all been led to believe a shedload of garbage concerning this.

I was wrong. The protein issue is still coming up frequently.

I’m still seeing comments under vegan articles like ‘we need animal protein or we get weak and tired,’ or ‘I’ve never seen a vegan that didn’t look pale and sickly.’ Never mind the fact that there are plenty of healthy and strong vegans out there (including these ultra-strong guys); the oft-spouted ‘pale and sickly vegan’ shizzle comes from the belief, as erroneous as it is deeply entrenched, that we need a certain amount and certain sort of protein (i.e. meat) for strength.

Admittedly, I DO live in a bit of a vegan bubble, and I reckon I underestimated just how profoundly ingrained the whole ‘YOU NEED PROTEIN FROM MEAT OR YOU WILL DIE’ thing was.

If you are a new vegan and wondering where you’ll get your protein, or more likely, if you are coming up against this question from concerned friends and family, this is for you.

What’s the deal with ‘complete’ and incomplete protein?

Protein is an essential macronutrient and we need it, this much is true.

There are 20 amino acids, 8 of which are essential to our bodies – i.e., they cannot be synthesised.

Some people may tell you that meat is a ‘complete’ protein (i.e. contains all the necessary amino acids), and that plant protein isn’t, and think they’ve won the protein argument.

It is true that plant food doesn’t always contain all the amino acids, but it’s also a fact that we don’t need to eat complete proteins.

We can eat foods that contain the amino acids separately, and our bodies are clever enough to put the pieces together themselves. Rice and beans combined, for example, are an excellent way to get the full complement of amino acids, (lots of world cultures have known this forever, think of chana masala and rice in India, or rice and beans in Cuba); beans and wholewheat works great too – think beans on toast, or wholewheat pasta dishes that contain beans. See? It’s as simple as that. And the steamed broccoli you have on the side? Well that actually contains more protein per calorie than beef!

However, please don’t think you need to pay lots of attention to food combining in order to get enough protein, you really don’t. Eat whole, plant-based foods and you’ll easily be getting enough – without the health risks associated with animal protein!

How much protein do we need?

Just remember, it serves the meat and dairy industries well to have us believe that we need as much protein as possible.

We actually need about 10% of our daily calories to come from protein, a little more if you are pregnant, breastfeeding, or an athlete.

It’s actually harder to NOT reach them than it is to reach them!

How best to get that protein?

It also serves the meat and dairy industries to have us believe that there is only protein in animal products.

Some people even know there is protein in plant foods (food scientists and dieticians for example) yet they still believe (thanks to meat and dairy industry advertising) that animal products are the BEST source of protein.

Just look at the food plate the United States Department of Agriculture and the US government (who subsidise the meat industry) use for dietary recommendations to the public. 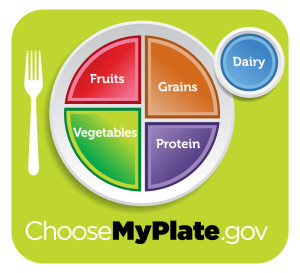 This plate graphic does not represent the fact that there is plenteous and sufficient protein for us in vegetables, grains and fruit without needing the meat. To be fair, in the text on the USDA website they do include nuts and seeds as protein, but many people don’t read the information on the website. They just focus on this graphic and think that ‘protein’ means meat – which was very possibly the intention.

This graphic does little but perpetuate the idea that protein = meat and meat only.

Those with interests in livestock agriculture have, quite frighteningly, well and truly achieved making this belief mainstream.

As we’ve seen above, protein is in all whole foods.

Getting enough protein on a vegan diet is NO PROBLEM AT ALL!!!!

As well as the brown rice, bananas and greens mentioned above, other protein superstars are beans, lentils, legumes, nuts, seeds, tofu, tempeh.

Just eat a variety of whole foods and you’ll be good.

Look, I really need convincing – is there any chance at all of becoming protein deficient on a vegan diet?

Anyone heard of kwashiorkor?

Yet you’ve surely heard of cancer, heart disease and diabetes. This is because these are diseases of excess – which are the majority of diseases we suffer from in the western world.

Kwashiorkor is the medical term for protein deficiency. You haven’t heard of it ‘cos it doesn’t happen where you are. It is a disease of ‘lack’ as opposed to ‘excess.’ It can happen to emaciated children in parts of Africa, or in singular cases of seriously neglected children here, but that’s it.

I can bet you don’t know anyone who’s had it.

To the people who say ‘well, I was vegetarian but I felt weak and tired all the time so I had to go back to eating meat and the first time I bit into a steak I burst into tears of joy as I could feel the strength returning to my body’ – if you were feeling weak as a vegetarian or vegan, this was NOT a protein issue, but something else; very likely an iron issue. Possibly not enough energy-giving complex-carbohydrates were consumed; or maybe it was the fact that they just weren’t eating enough nutrient-dense food. If you just take the meat out of your diet and don’t replace it with nutrient-dense whole foods, you may have energy or strength problems, but this won’t be because of lack of protein.

Are there any dangers in consuming too much protein?

Too much protein is highly detrimental to us. Excess protein (specifically animal protein) is linked to osteoporosis, heart disease, cancers, and kidney disease.